Chocolatey turned 5 years old recently! I committed the first lines of Chocolatey code on March 22, 2011. At that time I never imagined that Chocolatey would grow into a flourishing community and a tool that is widely used by individuals and organizations to help automate the wild world of Windows software. It’s come a long way since I first showed off early versions of Chocolatey to some friends for feedback. Over the last 2 years things have really taken off!

The number of downloads has really increased year over year! 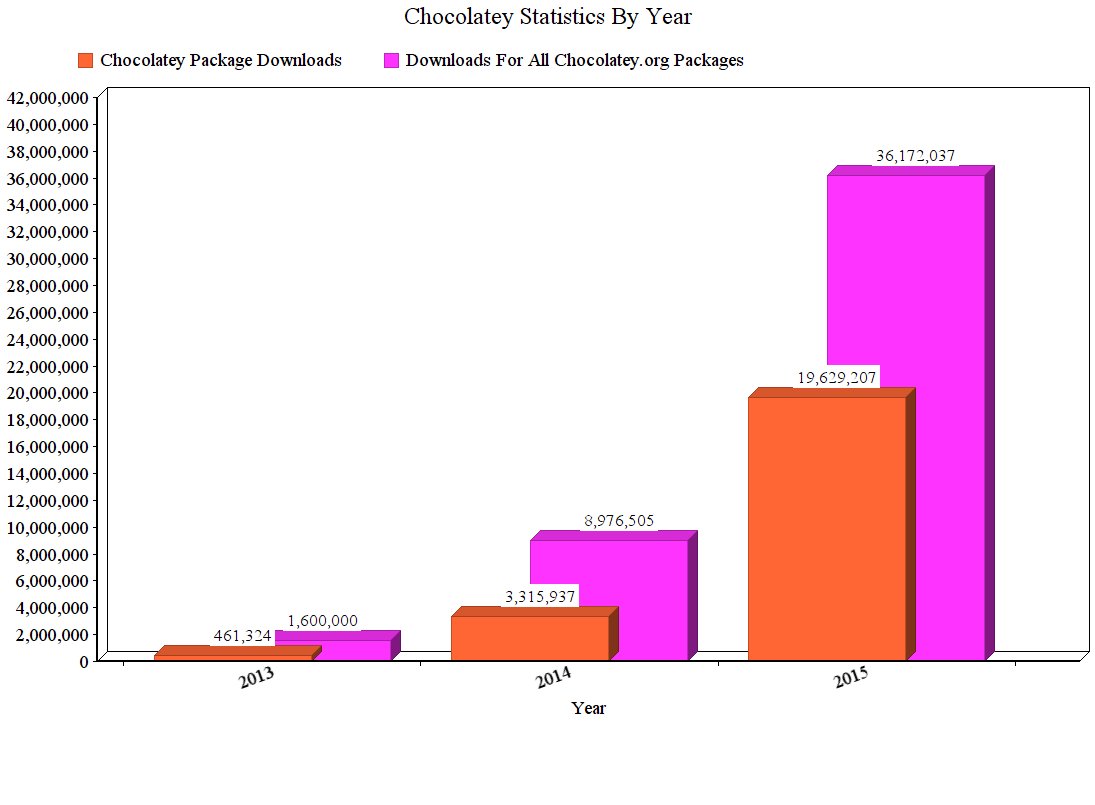 Note: While not a completely accurate representation of usage and popularity, the number of downloads gives a pretty good context. Going up by 7 million in 2014 and then by almost 30 million downloads in one year really shows a trend!

Let’s take a little stroll through some of the interesting parts of Chocolatey’s history. The history of Chocolatey really starts when I joined the Nubular (Nu) team in summer 2010.

This doesn’t represent everything that has happened. I tried to list out and attribute everything I could find and remember. There have been so many amazing package maintainers over the years, there are too many of you to possibly list. You know who you are. You have made the community what it is today and have been instrumental in shaping enhancements in Chocolatey.

Looking to the Future

The community has been amazing in helping Chocolatey grow and showing that there is a need that it fills. Package maintainers have put in countless and sometimes thankless hours to ensure community growth and consumers have really found the framework useful! Thank you so much! The next version of Chocolatey is coming and it is going to be amazing. Here’s to the next 5 years, may we change the world of Windows forever!

Rob Reynolds has been programming in .NET since the early days of 1.0... [Continue reading... at http://about.me/ferventcoder] On this blog you'll find just about anything I find interesting that has to do with development including Puppet and Chocolatey. Because we are all polyglot programmers in our own way, you may see anything from NHibernate to some custom CSS. Nobody is perfect and occasionally I may post something you find incorrect. Please keep me straight! With your help and interaction the community will benefit.
View all posts by Rob Reynolds →
This entry was posted in chocolatey and tagged boxstarter, chef, chocolatey, chocolateygui, pester, puppet. Bookmark the permalink. Follow any comments here with the RSS feed for this post.